Kiran Bedi is one such woman, the true icon of our country India. Kiran Bedi is a woman we truly admire. This woman has done so much for the country, whether it was fighting the injustices, standing strong for the poor and the needy, or joining the BJP and starting her political career and an activist for AAP. Today she stands for the BJP campaigning for Delhi elections and is constantly being opinionated by various other politicians about her character, work, and choices.

A strong woman would always make her presence feel firm in the states, and Kiran Bedi has truly achieved that. A feminist ideal for millions of women these days, especially the youth of India, we wish to thank her and pay our gratitude. It was her success and brilliance that gave rise to her being an inspiration for today. What makes her special is that Kiran Bedi is the first-ever female IPS officer in India.

Kiran Bedi was born in Punjab on the 9th of June 1949, she was the second of the four daughters of her father named Prakash Lal Peshawaria, and her mother named Prem lata Peshawaria. She did her schooling from a school in Amritsar called Sacred Heart Convent School and joined the National Cadet Corps there. 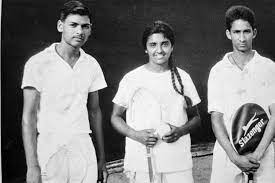 Kiran Bedi’s favorite sport was tennis, she played it for hours. She was great at it just like her father who was an exceeding tennis player himself.

After her schooling, she completed her graduation in B.A. English honors and also earned her Master’s degree in Political Science both from the Punjab University, Chandigarh.

She continued her education, even after joining the Police force and gained her Law Degree, LLB from a reputed college in Delhi University.

With all these degrees to her name, she went on to complete her Ph.D. from the Department of Social Sciences, Indian Institute of Technology, New Delhi with her thesis topic – Drug abuse and Domestic Violence. Her feministic approach was a challenge for all men.

Kiran Bedi’s parents sacrificed a lot on her education. After completing education the next step was to start her career.

Kiran Bedi always had a keen interest in becoming a teacher so she started her career as a lecturer at the Khalsa College for women in Amritsar, in the year 1970. As a young woman, she frequently visits the Service Club in Amritsar, where her regular interaction with senior civil servants inspires her to take up a public service career.

In July 1972 she started Police training at the National Academy of Administration in Mussoorie. Fighting all barriers, she was the only woman in the batch of 80 men and became the first woman IPS officer of India.

Kiran Bedi had to face a lot of tough assignments during her initial career including traffic postings in New Delhi, where she once towed away from the car of then Prime Minister Indira Gandhi’s office for violating car parking rules. After this incident, she was nicknamed Crane Bedi. One of the facts that not many people know of.

Kiran Bedi has received a variety of awards for she has performed for society. a number of these famous awards include:

Kiran Bedi and her colleagues founded The Navjyoti Delhi Police Foundation which was renamed Navjyoti India Foundation in 2007.

Since its establishment, the inspiration has provided residential treatment to just about 20,000 drug and alcohol addicts.

Kiran Bedi met her future husband Brij Bedi on tennis courts in Amritsar and on 9 March 1972, they got married at a simple ceremony at the local temple.

The couple had a daughter name Saina. On 22 May 2016, Kiran Bedi was appointed because of the elected official of Puducherry.

This is often Kiran Bedi for you, clear and firm, her courage and achievements have an excellent influence on the women of all generation in India. Her work & speeches have inspired women to boost their voice

Avail opportunities: Kiran Bedi believes that one should never stop learning and being their best version every day despite whatever age group they are in. There is so much that the world has to offer and it is upon you if you wish to avail it.

Kiran Bedi had a conversation where a group of girls once where she explained to them to always look out for improving their abilities and enhance themselves, they should be glad not just the five senses that they have but also the gift of nature. They should learn and understand the value of it.

Financial independence: Kiran Bedi served for 35 yrs will she took voluntary retirement in 2007. After starting to earn at such a young age, she believes that financial independence is the key to empowerment. One must learn to earn and save as an adult. It’s high time to make spreadsheets and knows exactly where they are spending their money.

They should stop being dependent on their parents. Especially for girls who get married and are dependent on their husbands for life, this only makes them weak. She believed that women should never strike the opportunity of making something better for themselves. This will help them in the future and give them utmost empowerment.

Hard work: Kiran Bedi believed that there is no such thing as luck. Luck is just a social construct for weak people. Everything is a combination of hard work and opportunities.

One who works hard and avails of the opportunities at the right time becomes successful. Hard work is the only thing that gives rise to success. She believed that no amount of hard work ever goes to waste.

Self–regulation: She believed that to work in a corporate field and to step into the world, one must control and regulate their behavior. Attitude is a very important thing. How you express yourself in front of others tells a lot about you

Never be afraid of odds: As a woman, a man will always look at you as an inferior human being. There’s so much societal pressure and patriarchy that one has to go through.

It starts all at a young age, even our parents teach us that these stereotypes are the only way to life.

But that’s not true, Kiran Bedi is a beautiful example of how she fought all odds and emerged as a powerful and successful woman. Every second person in the country knows her name. And it is all because she was never afraid to win and rise higher and higher.

QUALITIES OF A GOOD LIFE COACH

We are a group of internationally accredited coaches on a mission to transform LEADERS INTO LEGENDS. With our decades of experience, we deliver what every leader is entitled to create for themselves – A LEGACY.